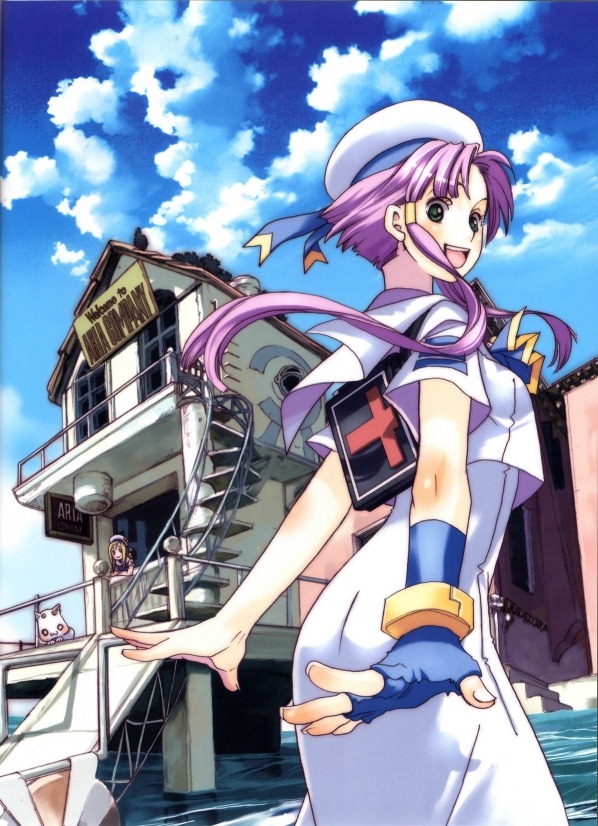 The last time I wrote about Aria, I had only just heard of the series with the latest (and last) anime series Aria the Origination. Since then, I’ve collected all possible volumes of both manga series, Aqua and its sequel Aria, released in the UK, as well as Kozue Amano’s wonderful Illustration Works art books. Knowing this, you probably won’t be surprised to hear my opinion on the series.

To those unfamiliar with Aria, we follow the story of Akari Mizunashi, a resident of Manhome (previously known as Earth) who has come to the water planet Aqua, known as Mars before its near complete terraforming. Specifically, she’s travelled to the city of Neo-Venezia, made in the image of the long-since flooded Italian city of Venice, to become an undine - a gondolier tourist guide on the expansive waterways of the city. What follows is Akari’s slow and steady progression as an undine, the people of the town she meets and befriends and the general wonderment of Akari’s “beautiful miracles.”

I would say that any expectations about Aria from someone who hasn’t heard of slice of life or healing-type stories would quite quickly be shattered, but Aria would never shatter anything - it’s far too peaceful for that kind of verb. After Akari’s initial acceptance as an apprentice of Aria Company, we settle down into a series of chapters showing her everyday life in Neo-Venezia, as well as introducing characters from other undine companies in the city.

I have to say, I love this series more than any other. I adore Aria and all it stands for. ‘But nothing happens,’ you cry. ‘There is no semblance of plot, nor action.’ Well, what Amano has done here is create a living, breathing utopia that is so endearing and wonderful that it’s like the world itself is the protagonist and plot all rolled into one. Every page has a view to the city, every panel has something to pour over and treasure. This is especially true when Amano drops the clutch and draws her feature pages (nearly always indicated by the previous page having someone staring with astonishment, as seen below). It’s the kind of scenery porn one could keep coming back to, finding new things every time.

Like many slice of life anime and manga stories, it relies heavily on the seasons to provide the sense of momentum and progression it otherwise loses out on. Amano makes the environments almost tactile, with detailed panels showing Neo-Venezia’s many faces throughout the year. Akari is the one who makes them feel special though, managing to find amazement and joy in even the harshest of conditions. Reading a winter chapter of Aria on a cold December’s night after a long cold snap gave me unbridled happiness thanks to Akari’s endlessly positive outlook on the seasons of Neo-Venezia.

Despite this, it is possible to pick holes in Aria. For me, the fantasy elements are the weakest part of it. Aria best handles its human relationships and the fragments of happiness it shows in everyday life. While I’ll admit some fantasy chapters were quite good (including A Night on the Galactic Railroad), I think they distract from the overall goal of the work, and break the illusion that an Aqua-style life is possible in the real world.

The setting is just too perfect. Neo-Venezia is such a wonderful place, where nothing bad happens, and everything is right with the world. If Amano’s aim was to make us change ourselves for the better, it’s hampered by the difficulty of translating such changes to the real world, an environment much grittier than the unobtainable paradise of Aqua. Sad as it is to admit, it seems to me that Akari’s rose-coloured glasses only function in an idealised world such as this.

Though it is idealised, Amano has taken steps to root Aqua’s utopian status in achievable ways. While it is like a paradise, its beginnings are founded in hard graft and its methods of living are humble. Often described lovingly by characters as “inconvenient”, Aqua’s ways hark back to a simpler time, making it very endearing to the reader while also ensuring the concept is realistic.

In short, read Aqua and Aria. Every chapter is a journey that’ll take you away from the tribulations of life for a fleeting moment, gently placing you back afterwards with the will to see things even just a bit more positively.

I also mentioned above that I got the first three Illustration Works art books by Kozue Amano. I can tell you they’re even more fun to pour over in every detail than the manga. Seeing these scenes drawn and printed in gorgeous quality really makes you realise the small details in each picture. In particular, Amano’s faces are so expressive - they convey the most complex of emotions and have so much character.

Both series are published in the UK and the US by Tokyopop, who unfortunately are in the middle of imploding at the moment. The future of Aria past volume six is currently unclear, especially since the editor responsible for it, Lillian Diaz-Przybyl, no longer works for the company. Let’s hope Stu Levy wises up and sorts it out. I can’t say I’m too positive, but if Aria’s taught me anything, it’s that we should have faith in people.

This post has been part of the March 2011 Manga Movable Feast, hosted by animemiz.