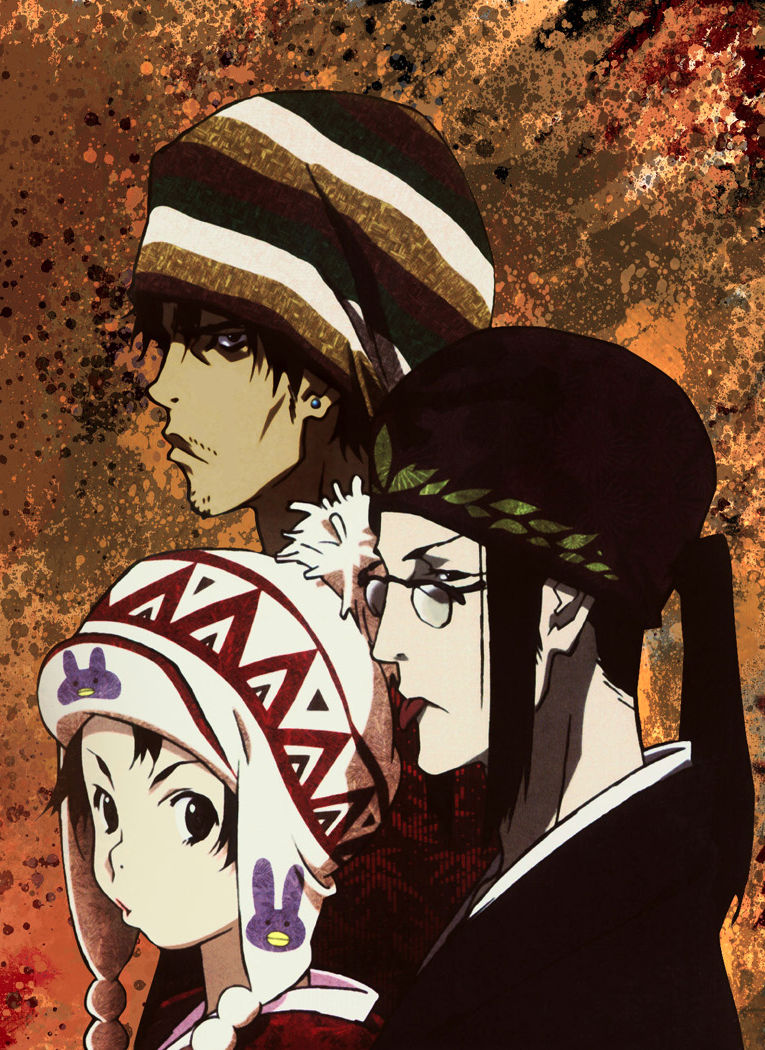 As you’ll have seen from the 2010 and 2011 offerings, this is the Reverse Thieves’ annual Secret Santa project, where the only gift you need to give is the gift of a great series your pick hasn’t had the pleasure of seeing yet. In this year’s post to the blog, I’m looking at a series that I’m sure many people have watched already, given it’s already been licensed. It’s Samurai Champloo, a hip-hop infused sword-fest by Manglobe, following our three main characters as they skulk around Japan looking for a smelly samurai.

If there’s one thing that I value in anime above all else, more than piffling things like character development and story, it’s style. Style over substance any day, I say. Luckily, this show has it in droves. Samurai Champloo is dripping in a strange concoction of American hip-hop and Edo period Japanese chivalry. On paper, these two styles are really like oil and water, but all you have to do is watch and see the two mix together surprisingly well, not least helped along by the effortlessly cool soundtrack by Nujabes who, much like the style of the show, merges the hard edge of hip-hop with more ambient melodies in his offering.

Another hallmark of style that I really am a nerd for is opening sequences. This one utilises a traditional Japanese art style for its stills, and remains quite minimalist in its direction, but throws in anachronistic twists, like the English credits with stencilled lettering and the turntable title screen. It loves to throw in these twists for cuts between scenes too, as well as having cheeky joke spoilers in graffiti-style fonts, all lending to the dual nature of the style. This is a series that really stamps itself onto the anime landscape as a stand-out in these regards.

The initial premise of Samurai Champloo doesn’t seem like it should hold much muster over 26 episodes, and indeed, the episodic nature of individual episodes has been somewhat lacking so far (I must admit, I haven’t finished yet). This, however, does nothing to detract from the beautifully choreographed action sequences. The conflicted nature of the soundtrack and the subject material also really complements the dynamism of the fights.

Because it’s easily the most stand-out thing of the show for me, I’m going to look a bit more at the soundtrack. It was released in a few separate CDs, and as I’ve already mentioned it’s somewhat different from what you might think.

Fat Jon, an American hip-hop producer, lends an obvious influence to the sound, but on further inspection it’s tone is much more mellow and ambient, thanks to Nujabes. Nujabes, real name Jun Seba, was a prolific DJ and record producer in Japan, owning numerous record stores and labels. His music tends more towards hip-hop infused jazz, sounding very down-tempo while still retaining the tenacity and energy of the rap and hip-hop influences it contains. It’s just a crying shame that Nujabes was killed in a car crash in 2010, else he could still be making fantastic music today.

It would be very easy to compare the music of this and the directly preceding show of the director, Shinichiro Watanabe. That show being Cowboy Bebop. The dynamics of the shows themselves feel somewhat similar, what with both shows having a rag-tag bunch of outlaw protagonists doing their own thing. The music of Samurai Champloo tries to be much more cutting-edge and experimental than Bebop’s did, with Bebop’s music being perfectly composed, crystallised pieces of the musical genres it covers, and Champloo’s focusing much more on Fat Jon/Nujabes’ inimitable style the whole way through.

In short, if you’re here for plot and story only, then you probably won’t get a lot out of Samurai Champloo, apart from some nice character interaction. For everyone else, it’s a solid show with plenty to enjoy.

Samurai Champloo is available on DVD from MVM Films in the UK and on DVD and Blu-Ray from Funimation in the USA.