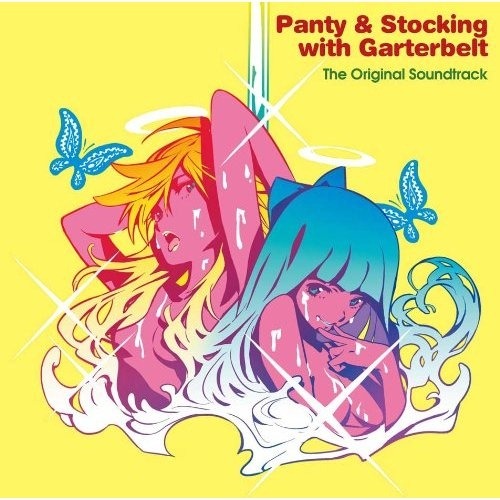 We’re well out of the Autumn 2010 anime season now, and I think something we can all take from it is not to put too much faith in hype. In reality, there were a few good shows, but nothing entirely earth shattering. In fact, I would probably call the anime linked to this review one of the worst offerings of the season. While it did something different with its western-style animation and delightfully filthy storylines, and did have episodes where it tried to experiment with its comedy, I didn’t find it terribly humorous or entertaining. Despite this, there are always diamonds in the rough if you look hard enough. The demon sisters were two of those, and this soundtrack is the third.

Like many others, I’m sure, I first noticed the possibility of a good soundtrack with the titular track Fly Away, used as the BGM for Panty and Stocking’s transformation sequences and a good proportion of their ghost battles too. Background music can sometimes take a back seat to the foreground action. Not here. If you were dozing off before the fight scene, you sure as hell weren’t when “FLY AWAY NOW” was suddenly blasting out of your speakers, trance melody in tow, all the while two angels have started undressing in quite a provocative way. It was the highlight of many a dull episode, so there might be a bit of positive reinforcement there too.

This gave us an indication of the style of music the soundtrack would lean towards early on. Lots of dance music (or electronica if you prefer). And because that’s the music I love the most, it made it even more exciting to finally crack open the Amazon.co.jp envelope and get my hands on the thing.

Many other anime original soundtracks like to plaster their CDs with tens of small tracks, all with their own certain mood that would casually fit in to the show. Except they’d all be so short and bland that it’d be hard to pick out more than a quarter of them. The PSG OST behaves much more like a traditional album, giving us fewer longer tracks which can still be slotted in to a particular scene, but also have so much character on their own.

The opening theme for the series. Oddly for an anime OST, it’s also one of the weaker songs on the album. It is quite punchy, especially when coupled with its brightly coloured, fast paced opening animation, but doesn’t really go anywhere. But hey, you can’t go many places in thirty seconds, can you? Of note here is that Hoshina Anniversary has written, sang, played the instrumental and recorded this song. Though probably not all at the same time, I’d imagine.

One of my favourite parts of this song is Koji Ishi as Garterbelt building up to it from the previous track, in a mad frenzy until suddenly… FLY AWAY NOW, FLY AWAY NOW, FLY AWAY! The build up from the previous track is fantastic at emphasising the memorable introduction of the track. The main body of the song consists of a fairly basic trance melody held together with some memorably lyrics and a nice and dirty bass line. It does run the risk of being repetitive, at least until the downtempo section that really turns up the dirty echo on the melody, singles out the vocals and carries the energy to the end of the song. ‘Tis a brilliant number.

We seem to be on a pattern here. Again, Beverly Hills Cock is quite a simple and basic song, with not many layers to peel away. Despite this, it has some memorable signature sounds - those ear-pleasing disco-esque flourishes that dot the track - as well as a breakbeat percussion giving life to the rolling bass.

At track 8, we reach the first song on the OST with a proper vocal track. And what a vocal track it is. The words very much reflect the mood of the series, generally trying to be as offensive as possible. It’s hard to fairly rate Debra Zeer’s vocal performance with TeddyLoid’s effects layered on top of it. It’s worrying is that this seems to be the first large production she’s been part of, but she does seem to have pulled this song off. D City Rock is also a slight departure from the electronica of the first part of the album into electric guitar riffs and rock percussion, though the dance influence is never far away with the effects piled on. The jewel in this song is the bridge into the third chorus, where everything goes downtempo and we’re treated to a gloriously dirty guitar and a great vocal line. Lovely.

Make sure you also watch the music video that was in the PSG series (it’s linked below). It’s packed full of western music references including nods to Oasis, Gorillaz, The Beatles, Pink Floyd, t.A.t.u, etc. and I thought it was one of the best parts of the series.

This, without doubt, is my favourite track on the album. Before I bought it, I really thought the honour was going to Fly Away, but this one far surpasses it for me. The almost gothic, harpischord-like sound from the intro sets out these powerful lyrics, the harmonies of which fit together brilliantly to make the song so listenable. The main chorus of the song is again backed by some nice and grimy bass lines, as well as what is by now the trademark breakbeat percussion of the soundtrack.

Another mainly vocal song, but our vocalist this time has some experience under her belt, and is noticeably better than Debra Zeer. It’s surprising that a song as positive and optimistic is on this OST, given the usual subject material of the show its for. “Even if I lose my power / I’ll get right back up / ‘Cause that’s the power of love / Something you don’t have” - after hearing the whole album, this and the last track (Fallen Angel - Mitsunori Ikeda featuring Aimee B) are aural antidotes to the relatively hardcore music preceding them. Champion has a light and uplifting piano accompaniment, and is likely to get under your skin very quickly.