It’s almost been a week since this year’s October outing of the MCM Expo, and the dust has just about settled around the ExCeL Centre. Once again, nerds of all shapes and sizes took to the DLR to buy lots of merchandise and/or dress up as their characters of choice. It was self-evident from the massive overcrowding on the platforms of Custom House station that this year’s Expo was as popular as ever, and to prove it, the organisers have stated the attendance was the largest ever - 46,400 over the weekend.

My excursion started dark and early pre-sunrise at Cambridge train station. Though even from this point one could tell fellow Expo-ers apart from the normal people. As we all navigated the Tube’s scattershot service, the nerd density increased to a massive level. The queue for the Expo, now very organised (as opposed to a few years ago), was as jovial as ever. Despite outward appearances and stereotypes, the majority of people at Expo are a very friendly bunch, and much high-fiving was taking place as the queue moved steadily forward.

Expo wouldn’t be Expo without the provided goodie bag, right? The DVD spoils this year were the usual, with a few old titles that many passed over at the time, and some bargain bin live action flicks. S-Cry-Ed, a 2001 action series, was present, though only the luckiest would have got volume 1, if at all. I ended up with volume 6. There was also an OVA called Submarine 707R, an action-ish story from 2003.

The format and layout of the show has remained mostly static throughout the years, though there was also a Friday afternoon opening this time around. Though I didn’t go, I heard it was nice to walk around the stands without the usual maul of people. The format on the Saturday was the same at least, open around 9am, browse the stalls, take in the anime industry panel, browse some more, go home. While this is the usual path for many, veer off slightly and there’ll be lots happening. While previously lots of unofficial gatherings took place outside, they were semi-formalised this year as the MCM Fringe Festival. Though still having that chaotic nature they’ve always had.

The industry panel for this year had more announcements that usual, with a more upbeat tone than normal. All of MVM, Manga Ent. and Beez Ent. were throwing new licences out left, right and centre. Beez have licensed the two noitaminA shows from Spring 2010, House of Five Leaves and The Tatami Galaxy, with more in the pipeline. I am very glad Tatami Galaxy has been licensed, as it actually manages to be quirky and refreshing. MVM have licensed Tower of Druaga, a sort of action-ey, comedy show with some great characters that would be well worth the watch. Manga have licenced both the second season of The Melancholy of Haruhi Suzumiya, and the movie sequel, The Disappearance of Haruhi Suzumiya. Not only that, the also have the Haruhi-chan and Churuya-san shorts, which are likely to be bundled in with the second season as a sweetener to help you survive. Manga are really riding high right now, what with also licensing the first season of K-On! (after fierce competiton from Beez) and Birdy the Mighty Decode. These will all be available next year some time, barring any complications. And as Manga sub-licenses from Funimation, Jerome made it clear that the flow of licences is as obvious as it looks, and that it doesn’t take a lot of thinking to discover what they have lined up in the future.

The one thing I love about our UK anime overlords is how frank they are about the whole process. It’s obvious that this grates on them just as much as it grates on us. The bureaucracy of organising Region 2/B releases while the Japanese worry about problems that don’t exist, and the slowness of official proceedings certainly sounds tough to handle every day. For instance, we can’t have any extras in our upcoming Blu-Ray release of The Girl Who Leapt Through Time (released next year), because the original production committee think that we’re on the same region as them and reverse-importing will destroy their market. There’s so much incorrect about the previous statement I’m not even going to start. Manga also mention how Kadokawa forced all of Haruhi season 2 into a bundle with the movie, despite the clusterfuck of Endless Eight. Little insights like this are what makes the panel so fun every year. It was also sad to hear that Andrew is leaving Beez for Kaze Europe. I know he helped a lot of university societies and really helped Beez, and I wish him good luck in his forthcoming job.

One thing I found very interesting about this years Expo is how new social media like Twitter affected proceedings. The standard “nice to meet you” greeting was augmented with Twitter username for many. It’s become a great way of meeting hobbyists in similar interest areas very quickly. This is really the first Expo where I met people for the first time who I have talked to many times previously, and it makes it all the better. I’d imagine the Fringe Festival was also good at doing this. There’s an interesting insight into the Expo from the outside in a segment on Up All Night on BBC Radio 5 Live, available on the iPlayer here (fast-forward to 1:15:26). While Dotun clearly needs to be convinced, I think it shows a good image. It’s also nice to finally hear from the moderate anime fans like the interviewer - I was starting to think there were none left!

So, without further ado, here’re my spoils of the Expo! 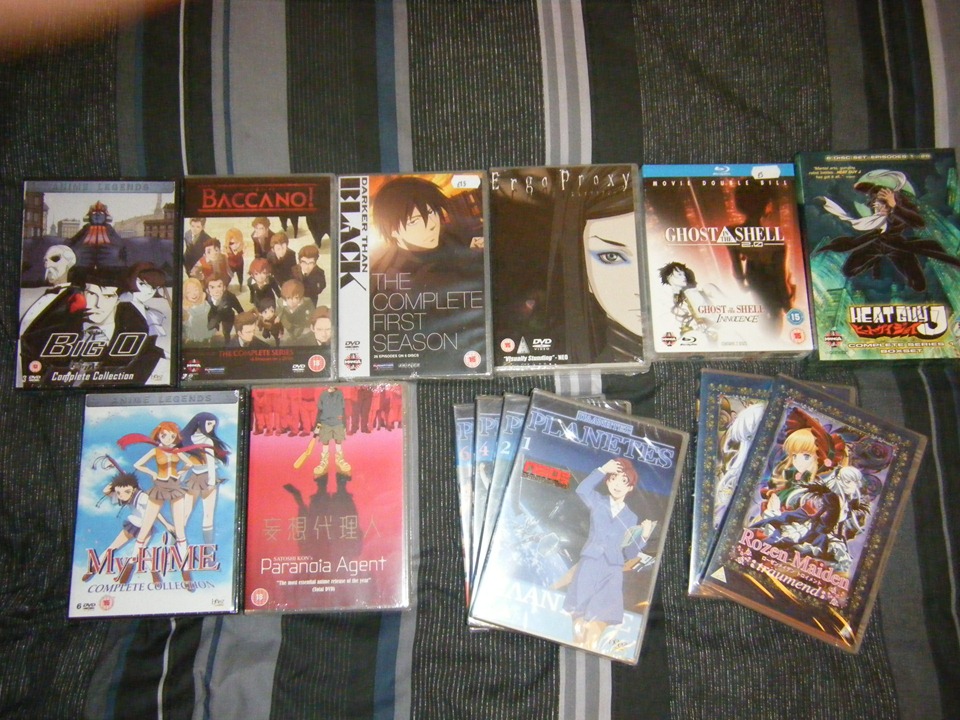 The Big O (Beez) - mostly because of the nostalgia of how it used to be on TV. Not sure if it’s matured well, but we’ll see.

Baccano! (Manga) - a sublime series about some people in America in the old times. Unbearably slick and well executed.

Darker Than Black (Manga) - this is one I got from a Manga goody bag, though I’ve heard it wasn’t bad for a recent series. The music seems suited to my tastes, from what I’ve seen.

Ergo Proxy (MVM) - a philosophical series that perhaps takes itself too seriously sometimes, but has a decent enough story for the majority of the time, and is very good at getting its atmosphere and mood right.

Ghost in the Shell Double Pack BD (Manga) - again, this was in the goody bag. Two seminal films, on Blu-Ray. Not much more to be said, it’s a collection must-have.

Heat Guy J (Manga) - as you can probably tell, this one was in the goody bag too. The only positive thing I can say is that I’m looking forward to how bad it is. I hope it’s the “funny” sort of bad, not the “bad” sort of bad.

My Hime (Beez) - this is an interesting one, as I’m buying it sight unseen based on what I’ve heard.While the concept seems generic, the execution is quite good, or so I hear. We’ll see.

Paranoia Agent (MVM) - another classic from the late, great Satoshi Kon. This should be a great watch.

Planetes (Beez) - so I was told by Beez that chances to buy this series are running out, which is terribly sad because it’s one of the best anime that no-one’s seen. Chances are already running thin, considering Beez didn’t have volumes 3 or 5, and apparently I got the last volume 1.

Rozen Maiden Träumend (MVM) - the second series of Rozen Maiden, an anime that really exceeded expectations for how good people thought it was going to be.

Azumanga Daioh Omnibus (Kiyohiko Azuma) - having watched and loved the anime, it seemed like there wouldn’t be a better opportunity to catch up with the four-panel comics than this. I just hope the anniversary edition doesn’t come over too soon.

Spice & Wolf novel, volume 2 (Isuna Hasekura) - Yen Press is doing quite well in my view. Everything manga/novel wise I wanted came from them, though most of it I couldn’t find. Though I haven’t read the Spice & Wolf novels yet, I’m sure some of the feeling from the anime will shine through.

The Disappearance of Haruhi Suzumiya (Nagaru Tanigawa) - I’m a bit raging I can’t read this, as I also couldn’t find The Boredom of Haruhi Suzumiya, the previous novel in the series. Considering the success of the movie, I’m looking forward to the novel.

Finally, a story. It was 5:30pm. I was tired, and facing the whole night in London, so it was about time to leave. On my way out, I happened upon a merchant selling sheet music and artbooks. ‘Well,’ I thought, ‘may as well have a look.’ And right there in front of me, I found volume 3 of Kozue Amano’s Illustration Works. The rare ones that have lots of Aria art in them. It was truly a chance encounter and the kind that makes it more than worth travelling to London once a year.

The only problem now is trying to complete the collection. But that’s a nice problem to have. I thought this as I boarded the dangerously overcrowded DLR train back to central London and back home for another year. To everyone I met last weekend: it was great to finally speak to you in person and I sincerely hope our paths cross again soon.