Uta∽Kata is a short, one season show that originally aired back in 2004. In what is nowadays an irregular occurence, the story of the show wasn’t adapted from a different medium, but was created especially for TV by gímik, a collective of Keiji Gotou (key animation, Fate/stay Night, Evangelion), Megumi Kadonosono (character design, Clannad movie, Rayearth) and Hidefumi Kimura (concept, Dai-Guard). gímik’s other well-known show is Kiddy Grade. The recent buzz around it, despite being from 2004, is that it was recently announced that it had been licensed by Sentai Filmworks in North America.

The basic plot is that our protagonist, Ichika Tachibana, one day finds a very old mirror in an abandoned part of her school, where she meets Manatsu Kuroki, a mysterious girl who appears from the mirror. As payback for helping Ichika find her mobile phone, Manatsu wants her to utilise the power of the Djinn, elemental spirits whose powers she can use, then write about her experience. 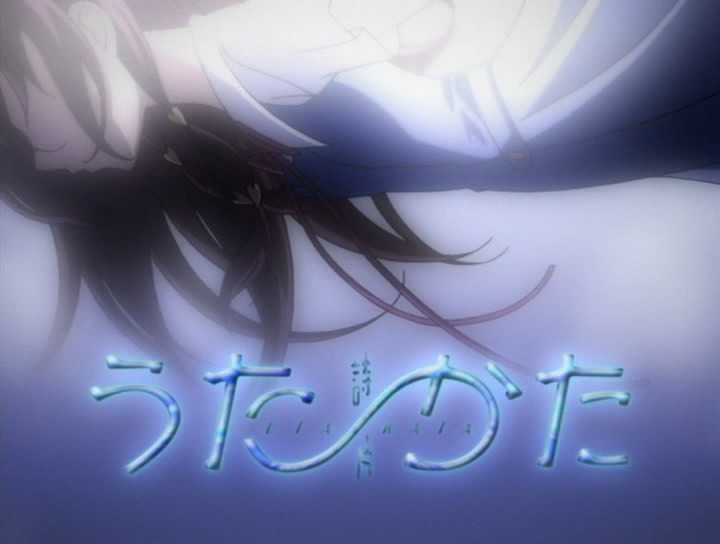 It’s quite difficult to narrow Uta∽Kata down to a particular genre or demographic. The fancy costumes Ichika wears when possessed by each Djinn are firmly in the magical girl realm, each one designed by famous faces in the anime/manga industry, and evoking a very Card Captor Sakura feel. The tone and content of the story is anything but this, though. While everything seems to be happy and cheery at the start, we very quickly gets the sense that things will turn bad. In fact, there’s no nuance about it - the fact that things are going get worse is rubbed in your face every other minute, leaving the surprise anything but that.

There is a lot that Uta∽Kata gets right, though. The suspense felt around the beginning of the second half of the series is palpable, and the show certainly isn’t afraid to get into subjects that many of its contemporaries willingly avoid. In fact, I think the whole point of the show is to display the human condition. There are a few obvious ones the show plays with, like its large emphasis on lying, but there are other altogether more subtle elements of the human condition it plays with. Mental illness, eating disorders, suicide, these are subjects that aren’t often dealt with in a serious way, rather than just being wheeled out for extra drama. A big theme of the show that I haven’t seen in many others is serious misanthropy. It’s painful but fascinating to watch Ichika’s journey of ever-growing self-hate as her body is taken over more and more. Also, it isn’t afraid to show a bit of gore here and there, but not so much that you become desensitised. It’s still gasp-worthy when it happens.

Despite the above, I’m not saying Uta∽Kata doesn’t have its faults. Ichika herself, initially, is incredibly annoying. She’s agreeable to the point where you will her to go against the grain, though part of this was probably intentional. This is especially the case when Manatsu wants her to use the powers of the Djinn under the pretense that it’s to do her summer homework. It’s laughable, but Ichika just goes with the flow and agrees. Quite why she continues to struggle through her power trips is sometimes unclear. The show is clearly aiming to have some sort of moral, but by the final explanation, I think it gets rather muddled and descends into anime cliché. If the message was simpler, I think it would have had more effect.

I really want to like Uta∽Kata. I really do. It’s an interesting concept, and its drama and suspense can be incredibly good. Having said that, while it has some great moments, I don’t think the series as a whole stays as consistently good. Oh, and avoid the OVA episode like the plague, unless the end of the series leaves you terribly heartbroken and in need of some form of closure. In the end, I would recommend it, but I just feel it could have been put together slightly better.

Uta∽Kata is out on DVD in North America on 2nd November 2010. Fansubs are available from the usual outlets.