So, the Manga All-Nighter for 2010 happened overnight two nights ago in London. All in all, it was a very nice event - comfortable seats, free stimulants to power through the night, a great crowd and a few anime movies to digest.

As well as showing the first episode of Fullmetal Alchemist Brotherhood, the event showcased docu-anime Musashi, based on the life of famous samurai Musashi Miyamoto, a Bleach movie, namely The DiamondDust Rebellion, the new Fate/Stay Night movie Unlimited Blade Works, and a new film from Madhouse called Redline.

Musashi was very interesting, giving a view of samurai and their tactics not often seen. Despite this, I feel it’s one to re-watch in the daylight hours. The Bleach movie was the Bleach movie. Basically inaccessible to people who haven’t slogged through the hundreds of episodes already (you poor souls). Unlimited Blade Works was adapted from a route in the original visual novel, again not being the most accessible film ever. The action sequences were well choreographed, but a rushed introduction to the world and the characters dampened things a bit for me.

You’ve probably guessed from the title of this post that my stand-out favourite from the night, however, was the first movie shown, Redline. 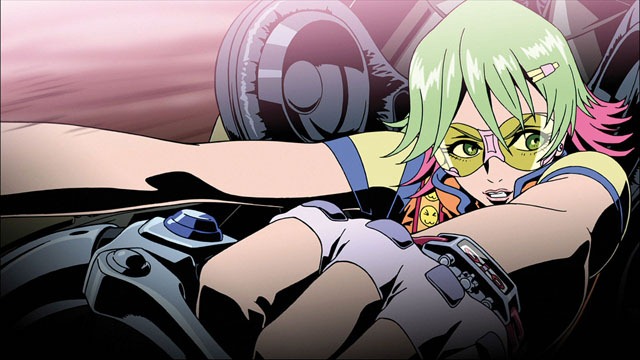 The story is set in the near-future, where hover cars are poised to completely take over the wheeled variety. Proper motor racing is still a popular sport however, with the main event being the hotly contested Redline race. The movie opens with a fantastically animated qualifying race between a myriad of over-the-top characters in long, embellished machines.

The pure speed is emphasised by the cars literally ripping up the track and the spectator stands as they fly by at impossible speeds, all set to loud, banging dance music. I adore the soundtrack for this film, the high energy tracks fit very well with the both the racing incidents and the daring cockpit manoeuvres of the drivers. As a bit of a petrolhead myself, the racing sequences in the film are pure crack. With the commentators describing the race the whole way, it almost felt like a futuristic Wacky Races on speed.

It’s clear that the main focus for the film is on the racing action, and that the pace and plot does slow somewhat in between the set pieces. Despite this, the highly stylised animation help to bring a sense of life to the worlds and characters. The plot itself is simple - here are some people who want to win, and have always wanted to win. Quite clichéd, and it gets slightly dubious when they throw in some more antagonism near the end, when the Roboworld government attempts to stop the main race from happening. It feels like an excuse to wheel out some fancy 3D rendered enemies and ultimately distracts from the pure racing action that really should be the focus of the movie.

Despite a somewhat simple plot, the pure energy and character of this film really shine through - it’s really very enjoyable. I’m pretty sure this was the first time it was shown in the UK, so it’s unclear when (and indeed if) it will be coming out. Hopefully it’ll be soon.