Now that the Winter 2009 season is in it’s winding down stage, it’s the perfect time to actually start some blogging about it. Where better to start than Sound of the Skies, or Sora no Woto (or So Ra No Wo To, to be pedantic). 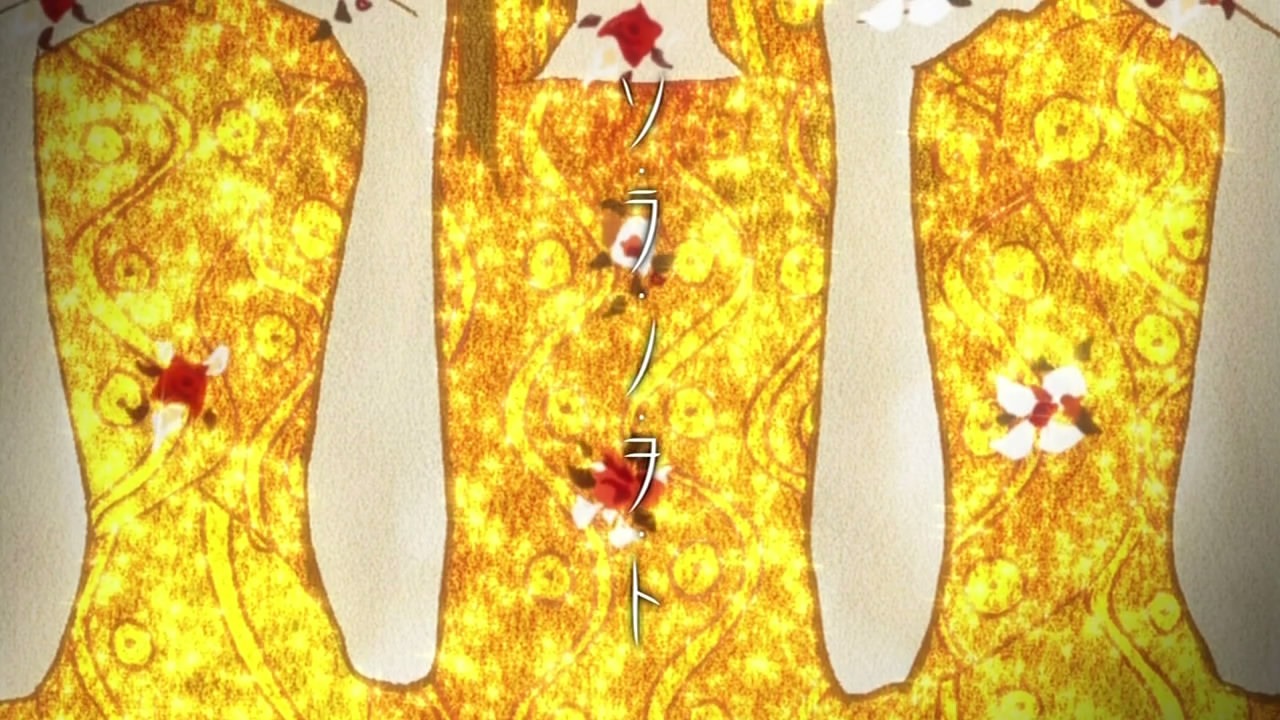 This is the first anime to be born from the new Strength of Anime timeslot on TV Tokyo, clearly trying to be a pretender to Fuji TV’s noitaminA block of programming that manages to churn out some of the best stuff each season. It’s got a lot to live up to, given the pure gems that noitaminA shows (Honey and Clover, Mononoke, Trapeze, etc.).

First impressions don’t bode well here. It’s clear that A-1 Pictures (the production studio) have borrowed heavily from the K-On! school of animation with this one. The characters are animated with as little frills as possible. And why not, you might say, when people will lap it up all the more? This is true, it even gives the designs a certain charm. But this isn’t even for lack of effort, when you look at the luscious backgrounds the team have made for the town of Seize, based on the walled town of Cuenca in Spain, and even researched on location. 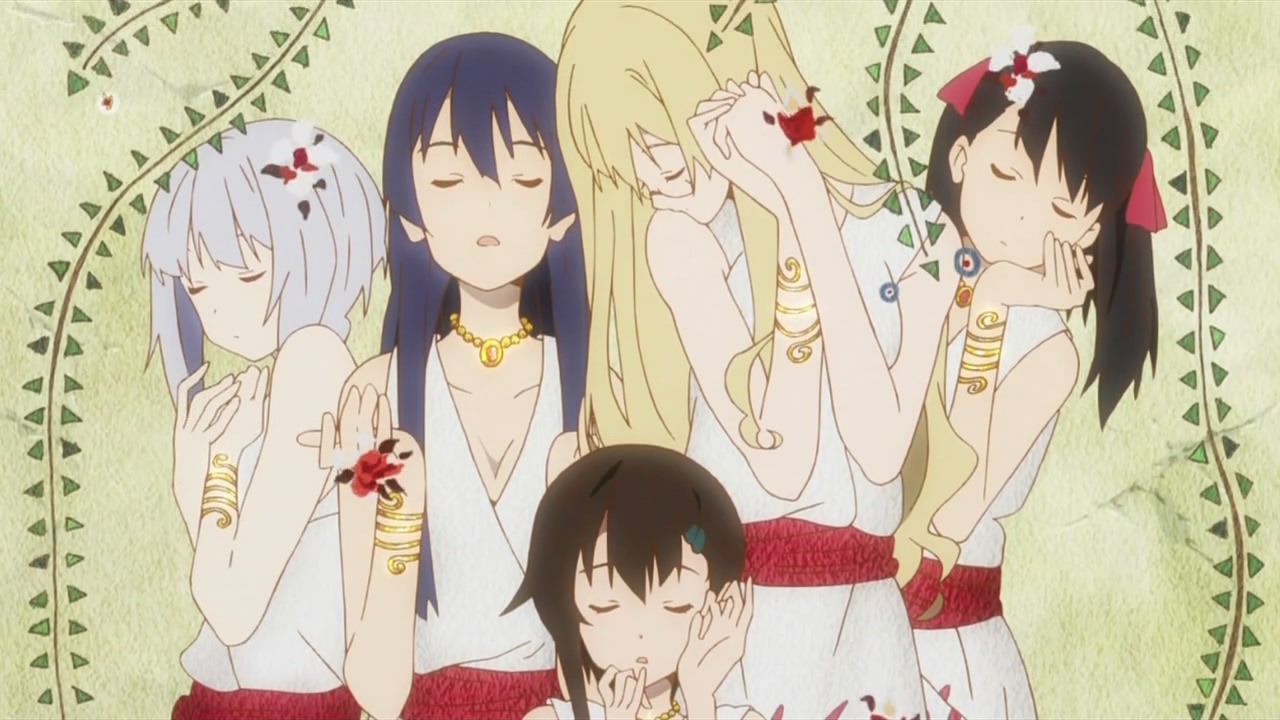 Looking past the character designs, the opening treats us to a Klimt-fest the likes of which we haven’t seen since Elfen Lied (note that the two series share a director, Mamoru Kanbe).

The content of the first few episodes, honestly, doesn’t take the plot of the series places, which in some ways belies it’s description - when you think of a war-time setting, it’s logical that there would be warfare, right? Instead, this series bases itself in a post-warfare setting, focusing on a platoon based in a town bordering no man’s land, not seeing much active service. I dove in with some expectations and found it jarring at first, but then settled in to the pace. The beautiful setting of Seize and the airy soundtrack gives the series a great atmosphere, and events should take on a leisurely pace to match.

The cultural references also lend very well to the atmosphere, and in the typical anime vein of borrowing (and twisting) not-Japanese culture, here we have a series based on a town in Spain, set in the remains of Switzerland, featuring a South African bird, with writing in French. I could go on. 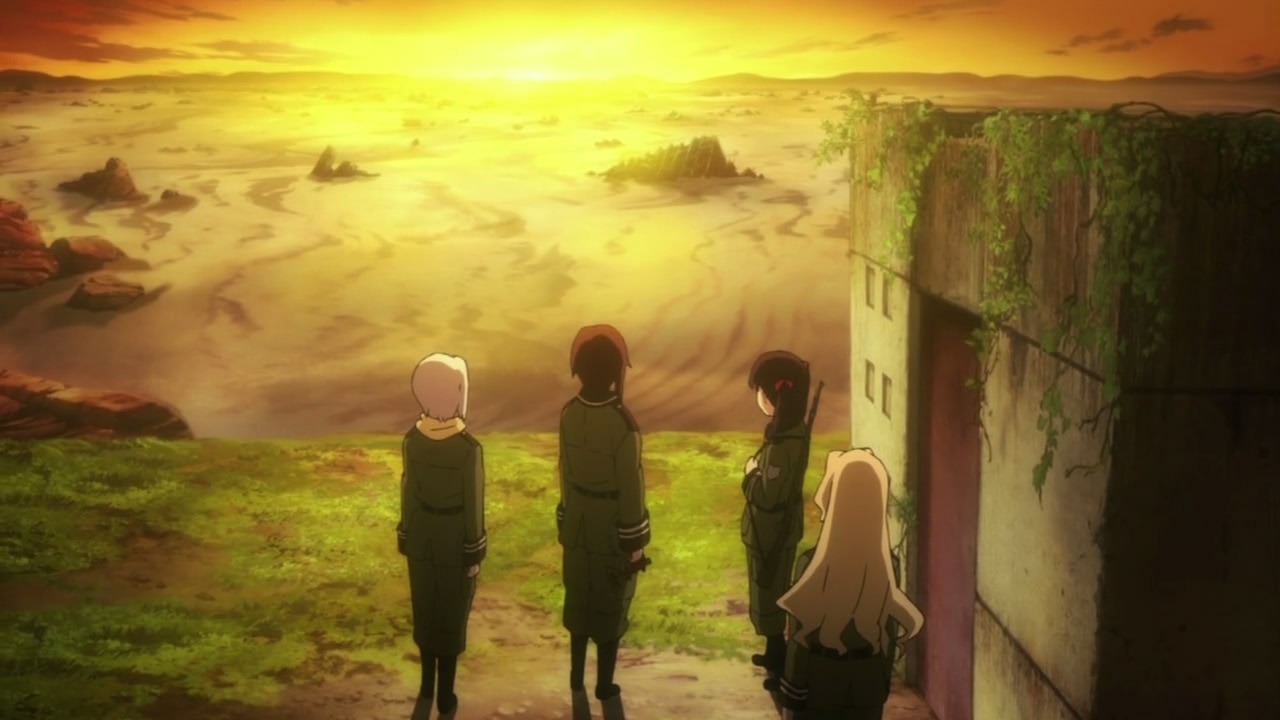 The feel of the show so far is almost reminiscent of Haibane Renmei, and for more than just the atmosphere. Even from the first episode, hints have been dropped that something larger is going on. Rio’s bell, the story of the ‘Maidens of Fire’, the blonde woman in so many flashbacks; there are so many treats left lying around to those who would bother to look in to things. And that’s good - anything interesting that an anime does, that is different from the established, should be heavily praised. We’re stuck in a cycle of copycats that needs to be broken free from.

We’re up to episode seven now, with eight coming out around now. It seems the slow pace is beginning to quicken in the second half, with Filicia’s flashback in stark comparison to the first half of the series, showing the horror of war in more frank terms than usual. I think that despite a slow start, this series is only going to get better from here on in.

Sound of the Skies is available streaming on Crunchyroll, a week behind airing for non-subscribers, and immediately (and in higher quality) for those who paid. Higher quality video is also available from the fansubbers.