You Should Be Releasing

First of all, happy new year to everyone reading this. Hope you’re having a nice year so far.

If you’re an anime fan, the United States is a great place to live. It’s one of the biggest markets outside of Japan, and also has quite a large population, meaning plenty of fans are willing to cough up for their favourites. The big companies are all based there, and all have established contacts with the industry in Japan. And from Japan’s point of view, America must be looking more and more appealing as a secondary source of income in these troubled times.

These factors mean that for any particular series, the bar for entry in America is much, much lower than it would be here in the UK.

The smaller market here means that profit margins are never going to be high on all but the most popular titles, the Evangelions and Halo Legends’ of this world. All of the English production being done in the US means that while much of the work here is removed, more is added in the complexities of licensing the different parts of a series, in both time and money - now you need to negotiate with two countries instead of one.

This isn’t even mentioning the relatively expensive certification costs from the BBFC, who need to be paid twice if your series includes both a subtitled Japanese version and a dubbed English version, which is a de facto standard between companies and fans these days.

After all this, it isn’t really surprising when you look at the number of releases in the US compared to here - not everything can make a successful transition across the pond.

This is the reality, but an anime fan can dream. And in keeping with the list-mania spreading around at this time of year, I’m making a list of anime released in the US that isn’t out over here, but deserves to be.

Special thanks to MVM for recently removing the need to put Rozen Maiden and Fate/Stay Night down here, as they’re being released hopefully some time this year. 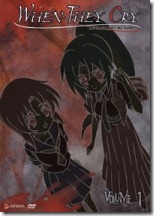 This one may be forever in limbo with regards to licensing, given that Geneon USA gave up the ghost mid-way through releasing this in the States, but it really does deserve to be on the shelves over here.

Also known as Higurashi no Naku Koro ni, this series focuses on a small rural village called Hinamizawa, where our protagonist Keiichi Maebara has just moved in to. He quickly finds solid friends at school, but begins to suspect they are hiding something from him when they seem to gloss over and change the subject on particular issues in the village. When Keiichi finds out about a murder and corpse dismemberment case, he begins to suspect his friends, and we see him slowly descend into madness as he tries to keep them away.

While Higurashi is a fun series, what with its bright and amusing characters, it can do horror with surprising effectiveness, as we see from the first story arc. Once the series gets started, the mystery element from the visual novel it adapted really kicks in as we begin to wonder just what the hell is going on. 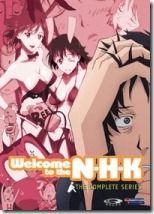 Welcome to the NHK

The first volume of NHK came out at the end of 2007 in the US, and has since switched licensees from the now-defunct ADV Films to the newest industry powerhouse, Funimation. Revelation Films are the company who license most of Funimation’s catalogue in the UK, but other companies have also released Funi titles. This is why I can’t understand why someone hasn’t picked up on this gem of a series yet.

The story follows Satou, a shut-in and social recluse who sponges off his parents’ money and never leaves the house, having delusions that a society called the NHK are in a conspiracy to keep him inside. Then he meets Misaki, someone who arrives at his door claiming to be able to rescue him from his hikikomori ways.

This series is a must-watch, not only for its satire of many otakuisms like dating sims, MMORPGs, moe-laden anime and the like, but also for its excellent portrayal of a recluse like Satou. Just watching his deluded mind come to dangerous conclusions about things really opens your eyes, especially when you find yourself going along with Satou’s mindset, realising you are, and hating yourself for it afterwards. 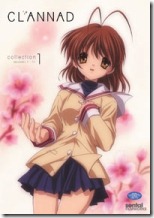 This one is a little unfair, given that the first release of Clannad was only in March 2009, and it usually takes much, much longer than ten months for any kind of announcement of a DVD, let alone a release.

This one is also up in the air after ADV USA split itself up (creating Clannad’s licensee, Sentai Filmworks), while ADV UK still operates, albeit only in distributing what remains of their back catalogue. With no existing contacts between Sentai and the other UK anime companies, this one may take a while, if it ever does make the jump across the Atlantic.

I’ve always had a soft spot for Clannad, it being named after an Irish folk band I was sure no-one outside of Ireland had ever heard of. This is an adaptation of a Key visual novel, which automatically means it will alienate a certain subsection of people who try to watch it. Guy meets five girls, goes down each route while basically ignoring the other four and ends up with one at the end.

This is one of the better examples though - unlike Kanon, the majority of the girls’ stories are rooted in reality, making them much more believable and moving. Adding to that, it also manages to do half-decent comedy, surprisingly enough. This visual novel was also designed to be for all ages from the beginning, meaning the TV version hasn’t had to be edited in any way to remove the raunchy bits. It’s all focused on the original plot, which I appreciate far more in an anime. Hit the second series, and this one really begins to shine. 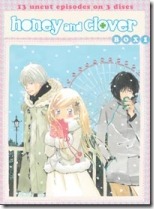 Again, I’m cheating a bit by putting a series that’s only a few months old on the list, but this is exactly the kind of release that’s likely to never make the transition. And that’s sad, because Honey and Clover does deserve some kind of release.

The everyman character of the show is Takemoto, who attends an art college in Tokyo, along with the residents of his apartment block, Mayama and Morita. The series at first revolves around Hagu, an 18 year old art prodigy, and the realisation of love and coming of age for the art students. The whole series has this kind of nostalgic feel to it, perfect for curling up and wallowing in. Everyone feels real, and the relationships are always fascinating to watch develop. Yes, not much happens in the way of action, but this isn’t the series to deliver that. It delivers an experience of the joys of university life and growing up.

Obviously there are many more shows that deserve to be out over here that I haven’t mentioned. I’ve named a few below, but feel free to mention any you think deserve to be here as well.

Aria the Animation - Godly slice of life show. Deserves a release, but is risky due to varying mileage with slice of life and/or healing shows.

Shadow Star Narutaru - Quite old now, and possibly hard to license due to its violent nature, but still an excellent supernatural story turned ever more in to a horror show the more it continued. Shocking for its time, but still a gripping watch.

Magical Girl Lyrical Nanoha - Hmm. I really enjoy this show, but only because of the surprisingly detailed fight sequences and awesome action that you would never expect from a loli-esque magical girl show. The second season even had a great plot, characters and development. Who would’ve guessed?