That special time of the year when I go back to work at university has came around again, which explains (but doesn’t forgive) the lack of postage on here. Reviews of Tokyo Magnitude 8.0 will be eventually finished, when I get around to watching the last few eps.

Anyhow, this years October London MCM Expo happened last weekend, and I was there, along with record numbers of visitors. It’s always quite something to be at an event completely dominated by nerds. Every other person was in cosplay, some passing it off better than others, it must be said.

Read on after the break for a little breakdown of the event and some more photos. Queueing for the event was a breeze compared to last year. This time, they devoted a whole hall just for people to wait in, whereas last time, they let us snake around the ExCeL Centre ourselves.

Despite being a general movie/comic/media expo, anime and manga tend to take over at this event for some reason. A large proportion of people walking around the show floor, and a much larger proportion of those loitering outside, were quite obviously in anime/manga cosplay. This was turned somewhat this year by the London Games Festival taking up much of the space with demos and such. If you’ve never been to a large anime convention or similar event before, the culture shock would be huge. You go from a specific, minority interest only known to you and a possibly a few other friends, whom you can probably count on both hands. Being in a huge room with 20,000 other people like this is… an experience, shall we say.

Side note: where the fuck did this whole “free hugs” thing come from? I didn’t think we would all stoop that low.

To look at the experience positively - anime fans are, on the whole, very nice, interesting and unique souls. We aren’t exactly social butterflies though, and boy can you ever tell. Moments range from the strange, to the complete facepalm moments. Also, you can really tell that the traders there selling their wares are very aware of the interests and tastes of the majority of people who visit expo. This is reflected in the overabundance of shonen series merchandise - Naruto, Bleach, One Piece, Hitman Reborn, Inuyasha, it all gets incredibly samey if you’re not a huge fan of shonen series (i.e. me). Beez were pushing Sword of the Stranger over the weekend. It’s a very good samurai action movie, starring a nameless samurai fighting with an orphaned boy. I didn’t think the story was world-changing, but for an acyion movie it certainly held my interest. This was due in no small part to Bones, one of the better Japanese animation studios. You wouldn’t think it, but this was actually their first feature-length anime movie. Questions were basically the standard fayre, inspirations and what they wanted to achieve and such. They did reveal a tidbit about a new project next year, possibly involving robots (how original).

UK anime convention regular Mike McFarland was up after, along with Troy Baker. Both worked on Funimation’s dub of the sublime series Mushishi, and I got to ask them about the difficulties of dubbing a show that really focuses on character and plot more than anything else. Apparently knowing what happens in the whole series and watching each episode raw beforehand helps a great deal in choosing how to adapt for a western audience.

MVM surprised and excited me by revealing that they’re finally releasing Rozen Maiden in the UK, at last. The original series and Träumend, by the looks of things. It’s not only exciting because Rozen Maiden is a very solid series, but because it shows that UK distributors are still interested in licensing things which have been US-only for a long period of time. They’re also releasing Fate/Stay Night and Romeo x Juilet, which is an excellent development. Manga have also announced they’ll finally be releasing Five Centimetres per Second on DVD and Blu-Ray too.

There are far too many fantastic series that would be so easy to release in the UK, but haven’t been.

Beez is also addressing the situation by soliciting opinions on series ideas for an “Anime Legends” line of releases. It’s possibly they’re aiming for classic 90s series, but as we’re heading in to 2010, some of the early 00s stuff could legitimately be called classic now too, however scary that is.

The main reason I go to events like this is to splurge on new (or old and reduced) merch, so I felt the need to show you my spoils of the weekend. 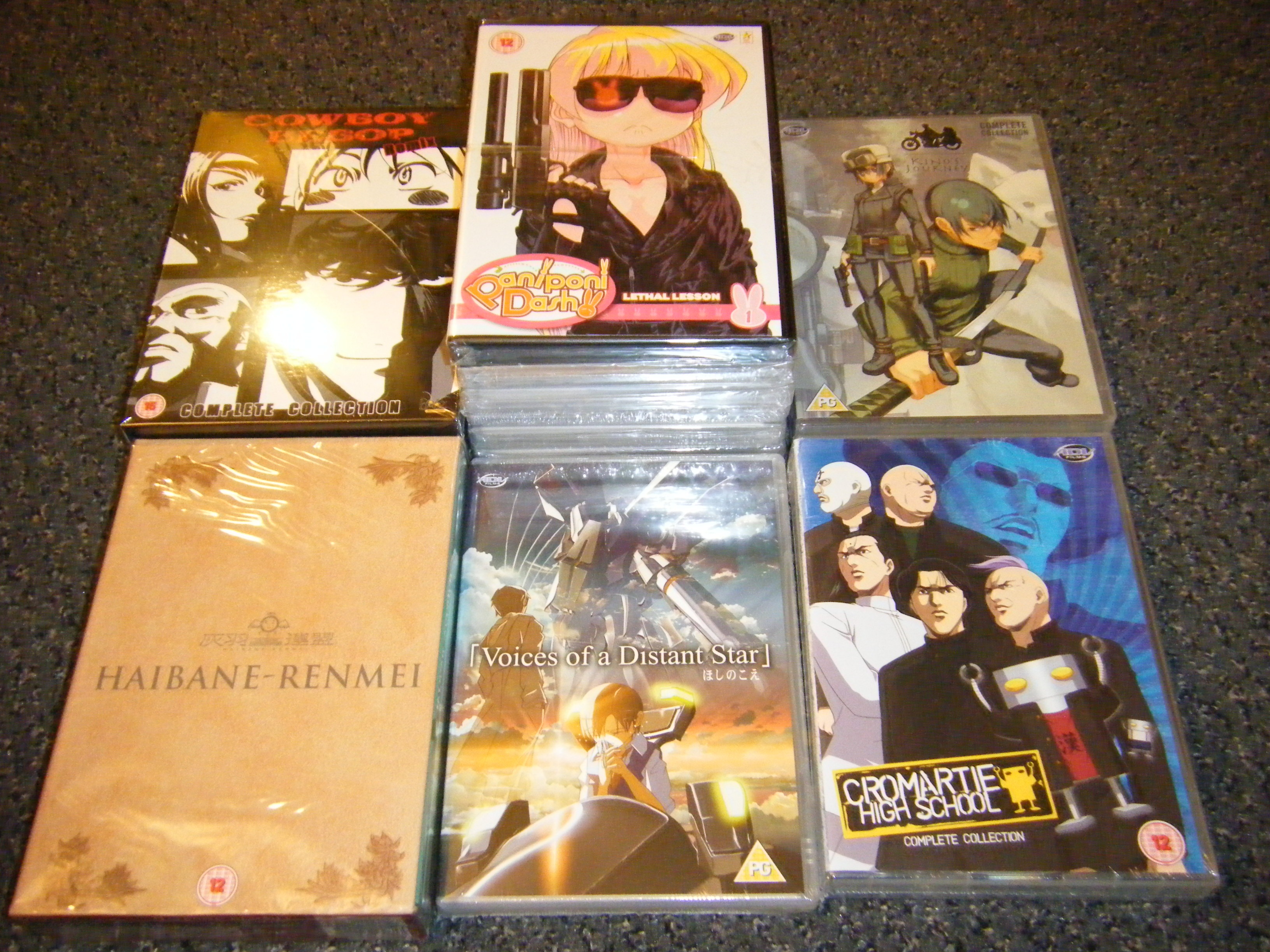 I bought the new Cowboy Bebop Remix boxset (which was finally released last month here), the Pani Poni Dash! DVD volumes (which luckily are still available and still have the wonderfully informative AD-Vidnotes), the Kino’s Journey collection (such terrible box art for such a beautiful series), the Haibane Renmei collection (in a lovely box), the Voices of a Distant Star short films and the complete collection of Cromartie High School. 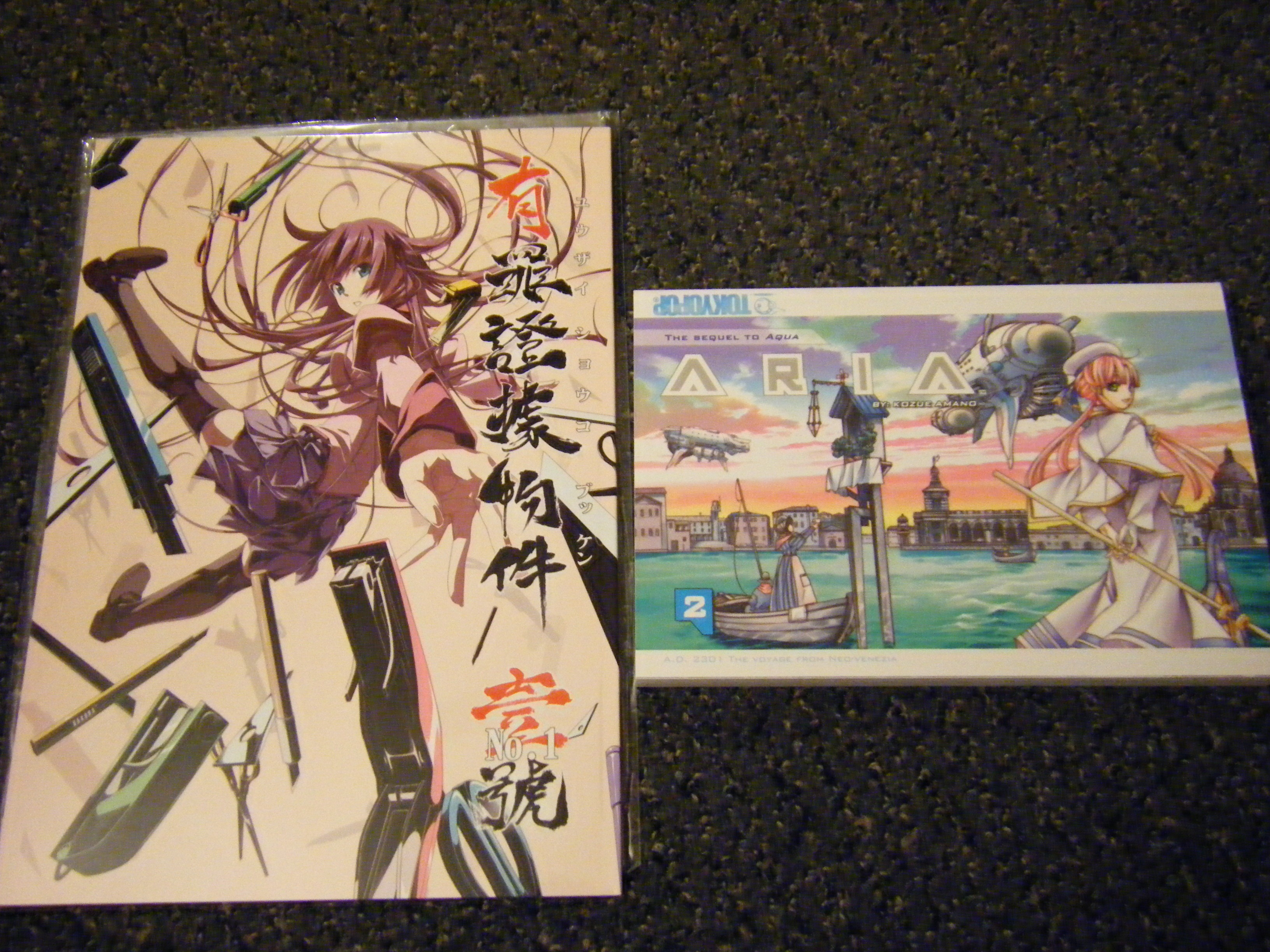 I’ve fell down the slippery slope another notch, by buying my first doujin. It’s a Ghostory one, because I enjoyed the series so much. It also isn’t really hentai, in fact it’s hardly even ecchi, but the artwork on the front cover was so gorgeous I just had to get it. I haven’t been able to find a translation on the internet (if anyone knows of one, I’d by very grateful). I was surprised to find that this is actually from C76, from which I thought it would be difficult to get anything from outside of Japan at the moment. I was only able to find Aria volume 2 as well, though I would have rounded out my collection as far as they’ve released if they had them.

See a few more photos that I snapped from the event from here, hosted on Flickr. There’s a public photostream available on Flickr too.